The Prime Minister is determined to look the other way as Narendra Modi oppresses Muslims and erodes democratic rights in India – while allying with Putin’s regime, reports Adam Bienkov

On a visit to India, Boris Johnson called for the world to unite against those who “seek to undermine democracy” and stand up to all “autocracies and autocratic coercion”.

These were fine words. However, they were undermined by the fact that he made them while standing alongside India’s deeply autocratic Prime Minister Narendra Modi.

In recent years, Modi’s regime has led what Human Rights Watch describes as a “crackdown on civil society and the media” in which his Government “prosecutes activists, journalists, peaceful protestors, and other critics” on fabricated charges.

Such “autocratic coercion” is at odds with Johnson’s own rhetoric.

In recent weeks, his spokesman has insisted that he is determined to stand up for the rights and freedoms of all journalists around the world. However, according to Amnesty International, Modi’s Government has “used repressive laws to silence [its] critics” in the press while “curbing freedom of expression both offline and online”.

According to its assessment, “human rights defenders, including activists, journalists, students, lawyers and actors, continue to face intimidation and harassment”.

As a result, the independent monitoring group, the V-Dem Institute, judged last year that India had slipped back to becoming an “autocratic democracy” under Modi.

This has had a deep impact on those seeking to hold his Hindu nationalist BJP Government to account.

Under his premiership, Indian journalists and activists have faced bogus charges of “sedition” which carries the possibility of life imprisonment. Meanwhile, the offices of media outlets that criticise the Prime Minister have been raided by Indian authorities, in what human rights groups believe are deliberate attempts to intimidate critics of the regime.

Human rights activists themselves have also been heavily targeted by Indian authorities, with the chair of Amnesty International India, Aakar Patel, last year arrested on charges of “creating communal disharmony” after tweeting about prejudice against Muslims in the country.

The UK Prime Minister was filmed climbing aboard a bulldozer at JCB’s factory in Gujarat. The company is chaired by the major Conservative donor Lord Anthony Bamford and has been the host of multiple photo opportunities for Johnson and other Conservative politicians in recent years.

However, Johnson’s latest photo opportunity was overshadowed when journalists highlighted the fact that the same bulldozers he was promoting were being used to demolish the homes of Muslim communities in Dehli.

The images caused outrage in parts of the country, with critics accusing Johnson of being “tone deaf” to the concerns of those targeted by Modi’s Government.

According to Amnesty India, the “UK Prime Minister’s inauguration of a JCB factory in Gujarat is not only ignorant but his silence on the incident is deafening. As Indian authorities clamp down on human rights daily, the UK Government must not remain a mute bystander”.

Yet, remaining a mute bystander is exactly what Johnson appears determined to be doing.

Asked about the JCB row, Johnson told broadcasters that, while he was willing to raise some difficult issues with the Indian premier, “the fact is that India is a country of 1.35 billion people and it is democratic, it’s the world’s largest democracy”.

Johnson’s willingness to look the other way has also extended to India’s alliances with Vladimir Putin’s regime.

As Johnson this week boasted to his own MPs that he has “led the world” in standing up to the Russian President, he has refused to take a similar stand with India.

Modi’s Government has resisted repeated calls for it to condemn Russia’s invasion of Ukraine, despite the horrors faced by those coming under attack from Putin’s forces.

Meanwhile, a new report by the Royal United Services Institute this week suggested that Moscow is laundering components for its weapons from countries, including the UK, through arms sales to India.

But when asked whether Johnson would push Modi to cut ties with Russia, his spokesman told reporters this week that “we don’t think it’s constructive at all to lecture India on how to approach the challenges it faces”. He added that Johnson would not be “pointing fingers” at Modi for his relations with Putin.

Sure enough, India’s Foreign Secretary Harsh Vardhan Shringla told reporters on Friday that Johnson had not put any pressure on the country over Ukraine during their talks.

Boris Johnson’s willingness to look the other way has both financial and political motivations.

The UK and India have close and longstanding economic ties, which almost any government would seek to maintain. Johnson’s determination to sever ties with the UK’s closest economic partners in Europe has also heightened the need for the UK to build closer economic ties elsewhere.

However, Johnson’s particular determination to avoid “pointing fingers” at Modi also stems from the Conservative Party’s attempts to win over voters with Indian heritage in the UK.

Historically, British Indians have been closely aligned with the Labour Party, due in part to perceptions of anti-migrant prejudice within the Conservatives. Polling in 2010 found that just one-in-four British Indians backed Johnson’s party, compared to 61% who backed Labour. By last year, that link had been severely weakened with only four-in-10 backing Labour, compared to three-in-10 backing the Conservatives.

There are multiple demographic and political causes for this shift. However, it is a shift that the Conservative Party has been keen to exploit.

In recent elections it has targeted British Indian voters with literature highlighting Labour’s criticisms of Modi. 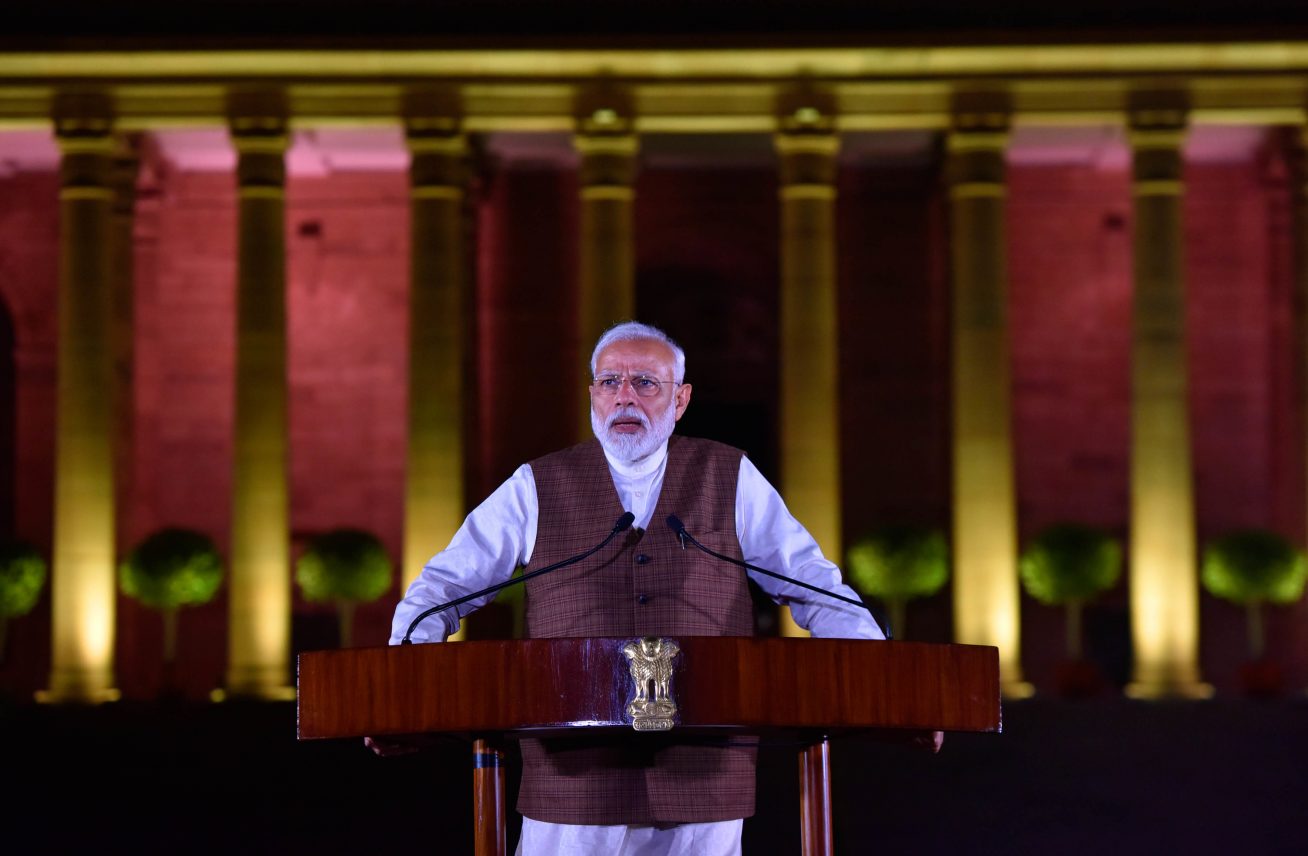 In 2016, it also sought to exploit anti-Muslim prejudice among some in the British Indian community, with leaflets sent to British Indians suggesting that Labour’s then London Mayoral candidate Sadiq Khan was attempting to take away their family jewellery.

At last year’s Conservative Party conference, the Conservative Friends of India event was the most prestigious of any taking place over the weekend. As guests dined on British Indian cuisine, large numbers of Johnson’s ministers queued up to address the crowd.

Many Conservative strategists see socially conservative British Asian voters, who have historically not backed their party in large numbers, as an untapped resource. For this reason, among others, Johnson appears willing to look the other way as Modi continues to erode democratic freedoms in India.

This is all completely at odds with the rhetoric of Johnson’s Government.

Speaking last month, Foreign Secretary Liz Truss called on the West to “stand up” to despots and cut its “strategic dependence on authoritarian regimes”. However, just one week later, Johnson left the UK for Saudi Arabia – where he urged the country’s dictator Crown Prince Mohammed bin Salman to supply Britain with more oil.

This two-faced approach to tackling global tyranny and autocracy is one that has already cost the UK dear.

Britain’s long dependence on Russian money and the Conservative Party’s political funding from individuals linked to Russia, meant that the UK was too slow to stand up to Putin. By trading political advantage for democratic principles, Johnson and his predecessors allowed the Russian President’s agents and assets to operate in the UK without restraint for too long.

Narendra Modi is not Putin and India is not Russia. However, Boris Johnson’s willingness to avoid “pointing the finger” while Modi erodes his citizens’ basic democratic rights, suggests that he has not learned from any of the mistakes the UK has made in recent years.