“Sometimes it’s very hard, but I want to live here and change everything,” said Fariha. “I want to change the world.”

She still sounds motivated and resilient, just like she did last year. “We are getting along in the new circumstance,” Fariha added with a cryptic smile.

I met Fariha in 2021 in the Kandahar Institute of Modern Studies (KIMS), just before the Taliban took over control of Afghanistan once again.

Though everything looks the same, a lot has changed since my last visit.

Fariha was a non-hijabi last year, but now wears a veil. Her freedom of movement is also now under scrutiny.

“Whenever we come out of our house, (the Talibs) are staring at us, from head to toe. Like wondering: ‘what are we wearing? What are we doing? Where are we going?’ They also often ask ‘can you please tell us where you are going?’ So, it’s hard for us. We are nervous about it.”

The ambience of KIMS has profoundly changed. Gone is the laughter of female students in their classes, loud discussions in American English accents in the courtyard, or classes under the mulberry tree. Now, the atmosphere is gloomy. The students whisper to each other.

Afghan women’s rights have suffered a devastating impact with the return of the Taliban, and there is a great deal of uncertainty. There is also a generational divide within the Taliban leadership: the older members like to follow traditional and tribal customs, while the younger ones wish to engage with the international community. 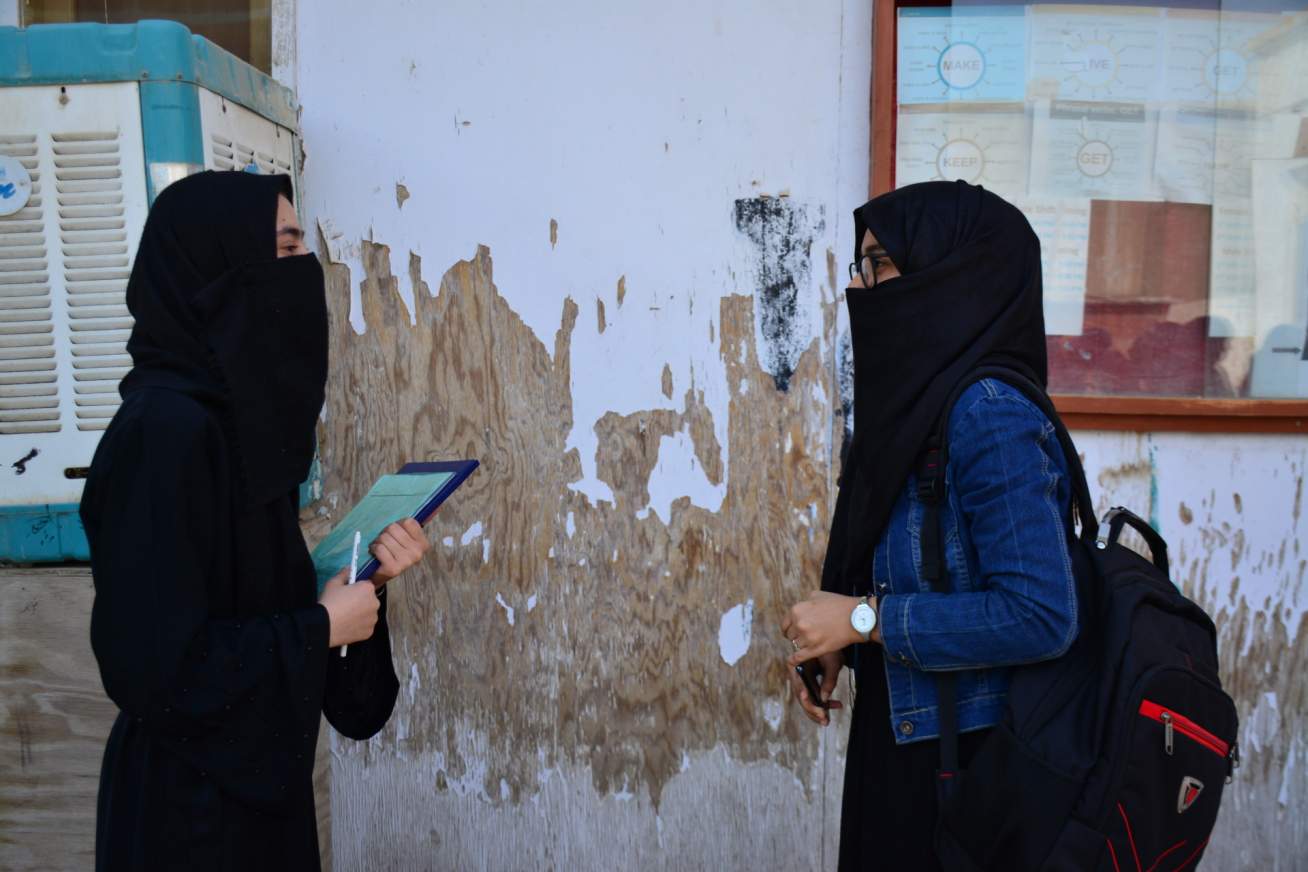 “There is no education and freedom like we have before,” said Banafsha, 17, from behind her blue veil. “Although there is some freedom, there is fear in the people’s hearts.”

Despite the US and its allies pouring hundreds of billions of dollars in to train and equip Afghan security forces, the insurgent group seized all major cities in a matter of days when the Western countries withdrew last year. ​

The corrupt Kabul Government, which in recent years has gradually lost its control over the country, collapsed. Nationwide confusion, a suicide bombing at Kabul airport, desperate people clinging to plane wheels, and chaotic scenes followed in the hasty evacuation of foreigners and Afghans that were witnessed by the world with shock.

“It took Afghans almost two decades to build their future and careers, but we ended up with zero gains,” disheartened Nida said.

In September, KIMS resumed classes when some stability returned to Kandahar. It had 100 male students in the three months that followed and only 20 female. Now, the centre has a total of 150 female students – a drop from the more than 450 it had before the change in government.

Many students and teachers have left the city or the country with their families. The enthusiasm to learn English and then go to other countries for higher studies and employment has waned.

The centre’s deputy director Shafiullah Omari encourages students to be optimistic and study hard to achieve their dreams. He counts three reasons for the dwindling numbers of students in his institute.

“First, students are hopeless and depressed at the moment,” he said. “They are worried about their future, that they won’t find a job as here in Government departments they are only hiring those who have Islamic education and not modern education.

“Second, the female students are sceptical that the present Government will allow them to study further, and that’s why they are staying at home.

“Third, because of the economic crisis, their families don’t have enough money to pay for their education. For example, we charge ؋200 per month as fees from the female students, but they can’t even pay that much.”

Falling numbers means financial instability for KIMS and the people dependent on it. The centre cannot pay its teachers on time because most students cannot pay their fees on time.

“Many female teachers support their families from the money they get here,” said Shafiullah. “Most of the time, we are ​late​ in paying their salaries for 10 to 15 days.

Civilian casualties have sharply decreased, but Afghans face a devastating humanitarian and economic crisis because of the international sanctions on their country.

The financial crisis has brought an already poor and aid-dependent population to the brink of starvation. More than 20 million – half of the Afghan population – suffer from acute hunger, which has led to an increase in child labour, scenes of women begging on the streets, and child marriages. Pictures of children in skeletal frames and with bulging stomachs have been seen around the world.

“Since the beginning of the year, roughly 13,000 newborns have died from malnutrition and hunger-related diseases in Afghanistan,” Birgit Schwarz, a senior official at Human Rights Watch, recently tweeted. “That is, on average more than 170 babies every single day.”

The classes run in two shifts in KIMS, with female students studying in the morning and male students in the afternoon. It provides transport services for the female students to come to the centre without facing any trouble. The buses now have their windows covered with curtains.

Some girls at the institute point to positive change – teasing and harassment of females on the streets have declined since Taliban control returned.

Before, male teachers took computer and management classes and trained both male and female students in public speaking. This has now changed, and male teachers are not allowed to teach girls in the institute.

“(The Taliban) have come here and requested equal opportunities to both the genders and asked us to hire more female teachers for female students,” said Shafiullah.

KIMS does not have the money to hire new teachers and, because of a lack of qualified female teachers, students who had finished their education were trained and employed as new teaching staff. Now, only female teachers are allowed to teach female students. Due to these shake-ups, dozens of students have stopped attending KIMS because of the lack of qualified teachers.

From the Taliban to IncelsThe Global War On Women

Shafiullah does not believe that the Taliban’s request to hire more female staff was to balance the gender gap. She said: “It’s a religious issue – they just give this excuse that we have to give equal opportunities to males and females.”

Since the Taliban swept to power, few provinces allowed education to all. Only boys’ schools and girls’ primary schools have remained open in most parts of the country. While universities could remain open, women were only able to attend classes if they were gender-segregated. At the end of last month, the Ministry of Education announced that​ girls’ high schools would be kept closed – just hours after it reopened them. The last-minute backtracking disappointed many students, including Fariha. “Boys are going to schools, and we are not, it’s injustice with us,” she said.

Mette Knudsen, the deputy special envoy of the UN for Afghanistan, recently called the ban “discriminatory”, saying that its impact will affect the future generations of Afghanistan in “terms of literacy and numeracy and will contribute to the cycle of poverty”.

During its previous stint in power, from 1996 to 2001, the Taliban banned female education and most female employment. But the country has changed and the Taliban now faces a different Afghanistan where people have different opinions. The group understands that and has repeatedly promised that education for girls and employment for women will be allowed under its rule. However, its U-turn does not bode well.

“We need to eliminate the difference between genders,” Fariha said. “We need gender equality in this country.”

Like other modern Afghan women, Fariha is aware of her rights and is not afraid to raise her voice for them. The Taliban will have to learn to adjust to this new generation of Afghans.

The Bosnian Precedent: Anticipating Russia’s Crimes Against Humanity in Ukraine

Jasmin Mujanovic, 7 April 2022
Jasmin Mujanovic argues that Vladimir Putin’s imperial plan follows the genocidal path set out by Serbian leader Slobodan Milosevic, and will be accompanied by the same strategy of disinformation and denial